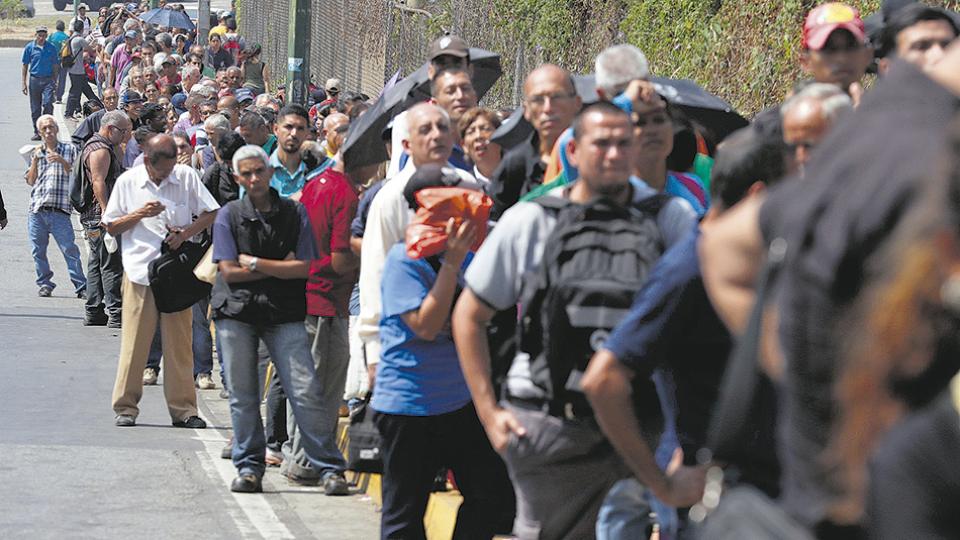 People awaiting in long lines due to the lack of subway service in Caracas. Image AFP

Nicolás Maduro announced a special thirty-day electricity plan, “a special charge management program that will allow the national electricity system to be balanced. He announced it on Sunday night, after a week marked by successive blackouts that put much of the population in a tight situation to resolve daily problems, particularly one: water. Yesterday, the president described the situation as a grave emergency.

“This plan will have special emphasis on not disrupting the energy needed to guarantee the supply of drinking water,” he said in the announcement. He also stated that school activities will continue to be suspended and that working days will end at 2 p.m., both in public and private institutions. Maduro appointed Igor Gavidia León as the new Minister of Energy to replace retired General Luis Motta Domínguez.

The minister of communication, Jorge Rodriguez, also said that the government is facing “multiform attacks on the electrical system,” which resulted in “significant damage to the transmission yard of the Simón Bolívar hydroelectric power plant in El Guri, and the network of transmission lines, as well as in the connection processes and automatization of the operation of the power generators in the processing
and distribution of electricity. The situation is complex, and the answers will not be immediate.

The predominant images of Sunday and yesterday were of people with bottles of water looking for a way to fill them. Stores selling water, fillers (where they fill drums), springs at the foot of the hill that borders the Caracas valley, upstream – where many people also went to bathe – in improvised water intakes in tunnels, spouts broken to satisfy. The fight for water was constant, the Government’s cistern operatives could not cope with the size of the demand. Yesterday afternoon saw the gradual re-establishment of the water supply at various points in and around the capital.

The capital, as well as several parts of the country, was transformed into a scene of individual, family, and collective efforts to solve the needs of both water and transportation. The government of the mayor’s office of Caracas set up special routes in view of the difficulty of mobility due to the lack of subway service, and they launched operational motorized Chavista teams to take people home.

Protests took place on Sunday afternoon and yesterday. Some were promoted by the opposition, to prevent the passage of tankers sent by the government and to create greater hardship to capitalize politically through violent scenarios. This method was used on other occasions, such as in 2017 and in particular in 2016, where the tactic was to generate centers of protest in the vicinity of the Miraflores Palace with no accountability, thereby attempting a large popular uprising through social networking.

In other cases, it was a spontaneous response to a situation of real difficulty caused by the prolonged lack of water which, unlike light, has not returned in several areas in recent days. Each day without water translates into a greater number of difficulties.

Guaidó, for his part, maintained the story that blackouts were the product of corruption, a fire caused by a lack of maintenance and the inability to resolve it and organize it by “block, sector, neighborhood,” reaching a conclusion that is based above all on desire and propaganda: “The myth, the legend, that the popular sectors once supported them, is over”.

He reiterated his call for an April 6 mobilization, called “Operation Freedom Simulation,” which he has yet to explain, although he announced that ” commandos of relief and freedom” will be created. He also asked the Bolivarian National Armed Force to be on his side, and affirmed that the arrival of U.S. Marines is now a possibility.

Yesterday the decision of the Full Court of the Supreme Court of Justice was also known, which decreed to ratify the prohibition against leaving the country without authorization until the investigation begun on January 29 is completed, the prohibition to alienate and tax his property, the blockage and freezing of bank accounts or any other financial instrument in Venezuelan territory. The Court also issued a fine of 200 tax units for contempt of the exit prohibition order, and ordered that a certified copy of the decision be sent to the president of the ANC “for the purpose of trespassing against parliamentary immunity as a member of the National Assembly”.

Therefore, there are several concurrent episodes in Venezuela. Those that mark the daily routine of practical difficulties and the search for their resolution, those that have to do with Guaidó’s attempts to recover from a declining political initiative, those of the government responding to each one of the most urgent material plans, as well as the always latent threat due to the framework of the assault on the authorities proposed by the opposition. Underneath it, as Foreign Minister Jorge Arreaza said, the United States.