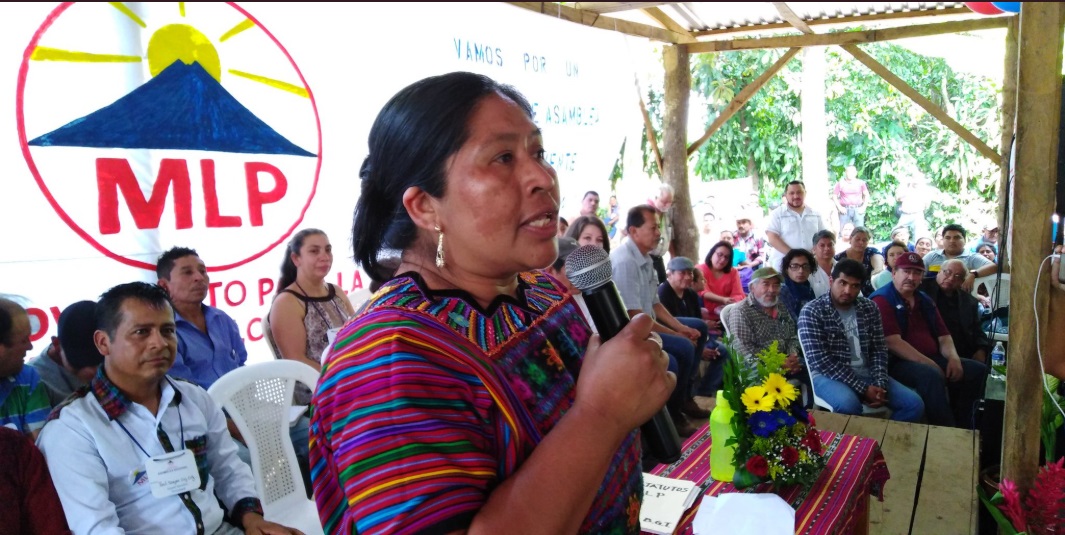 Guatemala, like the rest of the bicentennial Republican states of Latin America, was built on the shoulders of obedient and destitute Indigenous and peasant farmers. Here, as in the rest of the world, the political electoral system was designed so that only full citizens (white, wealthy, and aesthetically urban) could participate and win elections.

Indigenous people and peasants, despite having formally acquired the status of “citizens”, never had political rights (to be elected rulers, and to administer the states). They were born and died only with obligations. Never with rights.

It is within this historical ideological framework that the emerging popular insubordination in present-day Guatemala must be appreciated. It is an irreverent act that the traditional left itself could not support, nor did it want, nor does it want to understand.

Hundreds of communities in resistance to the subjugation/plunder by transnational corporations, in 2016, decided to promote a process of a Popular and Plurinational Constituent Assembly to create a Plurinational State. In order to advance this agenda, they decided to form their own political organization, because according to them, the ideological narrative of the traditional left does not include or welcome these or any other demands of the current indigenous peasant movements.

It is important to consider that these communities, from the first decade of this century, were already in a process of resistance, and proposed the need for the nationalization of privatized goods and services (through the revision of concession contracts).

Thus, by the end of 2018, after an unprecedented participatory assembly process, without outside financing, without ideological orientation on the part of the “revolutionary” avant-garde, they succeeded in legally registering their political organization called the Movement for the Liberation of Peoples (MLP). And, this political organization is known as political instrument (to mark the difference with the rest of the political parties of the country).

And so, without financial resources of millions, with candidates of their own, with post neoliberal proposals and a post-Creole State, those vilified of the Colony and of the Creole Republic will dispute political power at the ballot box on June 16. An unprecedented event.

It is the first time in the history of Guatemala, and perhaps in the Central American region, that indigenous and peasant populations organize themselves politically, and are on their way to participate in general elections. While there are local experiences, this is the first national experience.

In this sense, the next electoral process will be, and already is, a school of learning and demystification of the political electoral task as an act reserved and exclusive for rich-white-urban.

Why do they call their political organization a political instrument, and what do they propose?

They do it to differentiate themselves from the other 27 political organizations (parties) that will be in electoral contest in the next elections. They maintain that the parties belong to the rich, have owners and voters (they only activate in electoral times), and MLP is a political instrument of the peoples because it is the making of communities in resistance, without masters, nor money, and assemblies.

Unlike the other 27 political parties, the MLP proposes the need to revise the contracts for the privatization of goods and services. No party of the right, nor of the traditional left raises this urgent issue. In addition, the MLP proposes to promote a process of Popular and Plurinational Constituent Assembly to draft a new Political Constitution, and to create a Plurinational State. Likewise, always unlike the other political organizations, MLP presents the need to restore territories to the peoples, recover lands and water to guarantee food production and sovereignty.

These approaches were debated and announced, prior to the creation of the MLP, in social networks and in their assemblies. However, due to the “normalized” racism among the agents of the official culture, analysts and opinion leaders who define the current situation of the political electoral map did not pay them any attention.

To the surprise and discomfort of even the traditional left, the resistance communities that created MLP decided that their elected candidates for public office will renounce the right of pre-trial (which currently assists and protects popularly elected political authorities), and bank secrecy. In other words, officials elected by the MLP will not hide behind the “pre-trial” so as not to be investigated, nor will they hide their economic assets with so-called “bank secrecy”.

In addition, MLP deputies will not hire advisors or unnecessary assistants, they say.

Another determination that challenges the rest of the political organizations is that the MLP decided and published that its candidates, if elected as public officials, will receive a maximum salary equivalent to five minimum salaries (Q. 15,000, or $2,000). This determination, if implemented, will be an act of “cultural revolution” in a country where the President earns no less than the equivalent of $18,000. Mayors and deputies receive income equivalent to between 5,000 and 10,000 dollars for the public service they perform.

According to the published lists and photographs of its local and national candidates, the MLP has a distinctive physiognomy and a different aesthetic from the rest of the political candidates. It is likely that they will announce the candidacy of a rural indigenous woman for the presidency. If so, it would also differentiate it from the other 27 political organizations.

It remains to be seen whether the MLP can place deputies or mayors in the interstices of the Creole state. And, if indeed the communities in resistance will have the necessary mechanisms to enforce their determination to pursue a policy different from what they are accustomed to, and if they will truly challenge the neoliberal system and the Creole State.