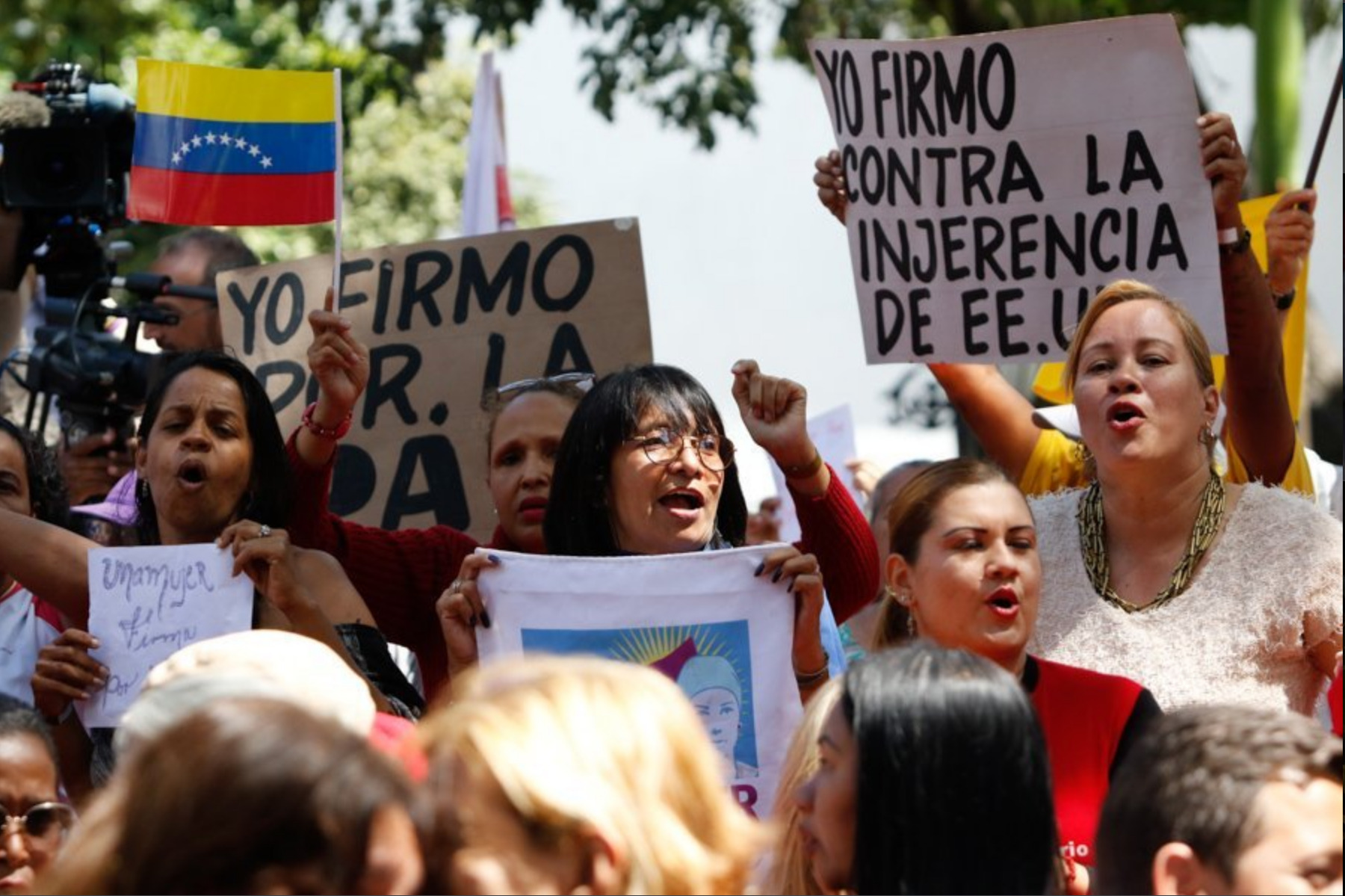 Last Thursday, the international hegemonic media erupted when images began to circulate of oil tankers and containers blocking the entrance of humanitarian aid on the Tienditas bridge between Colombia and Venezuela. International media, as well as US political leaders such as Mike Pence, Marco Rubio, Mike Pompeo, and John Bolton, shared the image and denounced Nicolás Maduro for starving his people and pointed at the Venezuelan military for complicity in this blockage of aid.

The media show was quickly debunked and exposed as false when several journalists and media outlets noted that it was impossible to close the Tienditas bridge as it had never been opened. The construction of the bridge began in 2014 due to a Venezuelan initiative, and though its was completely constructed, the bridge was never opened, and the fences that appear in the infamous image have been there for the past 18 months, and appear to be on the Colombian side, as shown by Justin Emery in his piece on Medium.

International media and US politicians have yet to retract their comments about the supposed closure of the Tienditas bridge to block humanitarian aid.

The media charade was the latest chapter in the attempts orchestrated from the United States to destabilize the democratically elected government of president Nicolás Maduro with the end goal of overthrowing him. This plan took force on January 23 when Venezuelan National Assembly leader Juan Guaidó proclaimed himself president of Venezuela. His declaration was immediately backed by the Trump administration, the conservative Latin American countries that belong to the Lima Group and several European countries. Some European countries gave Maduro an “ultimatum” and a deadline to call for fresh presidential elections and have since then, rallied behind Guaidó.

Since the 23rd, the US and its allies have been plotting and attempting various tactics to pursue their goal of destabilization and regime change in Venezuela and have mentioned on several occasions that the military option is on the table.

While the government of Nicolás Maduro has rejected the offers by the United States and its allies to send humanitarian aid to Venezuela, its reasons are clear. Maduro does not pretend to deny the dire situation faced by the people of his country due to food and medical shortages, but he has made clear that the greatest factor causing social and economic distress within Venezuela is the inhumane economic sanctions imposed by the US and its allies.

Since his re-election in May 2018, the sanctions have become even tougher. The harshest round of sanctions imposed so far came on January 29, when the US announced it would block 7 billion dollars in assets of the Venezuelan state oil company, Petroleos De Venezuela SA (PDVSA), and 11 billion dollars of their export revenue.

A report released by the Latin American Strategic Center of Geopolitics (CELAG) on February 8, 2019 analyzed the impacts of the economic boycott on Venezuela. They found that the international financial blockade against Venezuela since 2013 is the principle element responsible for the economic crisis and that between 2013 (when Nicolás Maduro was first elected president) and 2017, the blockade caused the loss of $350 billion dollars in the production of goods and services.

The offers of humanitarian aid from the US that have been coordinated with the illegitimate, parallel government of Juan Guaidó are offers with thinly veiled political intentions. Both the International Committee of Red Cross (IRCR) and the United Nations declined to participate in the delivery of aid to Venezuela that was to be coordinated by the US and Guaidó citing the political nature of the act. The IRCR warned the US government about the risks of delivering humanitarian aid to Venezuela without the approval of security forces or from president Nicolas Maduro, and that talk of aid must be kept out of political conversations.

Instead, the ICRC is working directly with the government of Maduro and with its ministry of health to expand its budget to $20 million dollars. The UN continues to recognize the legitimacy of Nicolás Maduro and is supporting peaceful dialogue-based solutions to the current conflict.

Another central reason given by the government of Nicolas Maduro for rejecting the aid is that within the containers that supposedly contain food and medicine, it would be possible to also hide arms and weaponry. In the midst of a coup attempt that has been orchestrated from Washington, it would not be surprising if the US would try to smuggle in weapons, especially given that attempts to instigate uprisings within the ranks of the armed forces and distinct territories of the country have been discovered by Venezuelan intelligence officials.

Guaidó even passed a law in the National Assembly, which is still in contempt of court, granting immunity to all members of the armed forces who fight to “restore democratic order” and against the government of Nicolás Maduro. Guaidó also mentioned in an interview last Friday that he would be open to US intervention to push Maduro out of office.

As of now, the US has coordinated with Guaidó to deliver food and medical supplies to points outside of Venezuela. However, Guaidó has vowed that on February 23, the humanitarian aid will enter the country and “in 11 days the FANB (National Bolivarian Armed Forces) will have to decide if they are on the side of the Venezuelans, of the constitution, or of the Usurper” he posted on Twitter.

Meanwhile, the mobilizations of the Chavista grassroots within Venezuela have continued with force. Since February 6, hundreds of thousands of Venezuelans across the country have been lining up in the Bolívar Plazas of their city, in their universities, cultural centers and other spaces to sign a letter written by President Nicolás Maduro to the people of the United States to defend peace in Venezuela and demand that the US government stop its meddling actions and its attempts to incite a coup in the country.

There have also been consistent street mobilizations in support of the government and the Bolivarian Revolution. On February 12, thousands congregated in the Bolívar Plaza to celebrate the Day of the Youth, which commemorates the victory of the Liberating Army in the battle of Carabobo in 1914. There, Nicolás Maduro announced the expansion of a youth employment program called Chamba Juvenil, which in the next six years create a million jobs for youth. During the celebration, Maduro reiterated the government’s stance to defend Venezuela from outside intervention and work for peace.

The opposition lead by Juan Guaidó has also held mobilizations over the past few weeks but on a much smaller scale. Photos of past marches have shown protesters carrying the US flag and the statue of liberty. In an interview with an Israeli publication on February 12, the self-declared president stated that he seeks to renew diplomatic relationships between Venezuela and Israel and would establish the Venezuelan embassy in Jerusalem.

Across the world, people’s movements have expressed their opposition to any interventionism in Venezuela. Hundreds of organizations, intellectuals, activists, artists, and politicians worldwide have expressed their support and solidarity with the democratically elected government of Venezuela and opposed the interventionism of the US and its allies through rallies, marches, letters and declarations.

On February 12, dozens of Senators and Congressmen, hundreds of Colombian organizations, and civil society groups signed a letter, condemning the attitude of the Colombian government towards the situation in Venezuela and opposed the use of their territory as a launch pad for military actions against the Bolivarian Republic.

In the letter to president Iván Duque, they expressed their “rejection to any type of authorization or action that implies the participation of Colombia in an armed confrontation with Venezuela. This rejection includes, of course, the possibility of soldiers from the United States to use our land, sea or air space, as a theater for their military operations against our brother country. Colombia has already suffered 60 years of armed confrontation that we have sought to resolve through peace talks and we will not allow you [Duque] and the Government to bring us to a new armed confrontation, now of international reach. Our moral and political duty is the defense of peace in Colombia and in the region.”

Musician and activist Roger Waters also raised his voice in support of Maduro and the Bolivarian Revolution. He posted on Twitter “Stop this latest us insanity, leave the Venezuelan people alone. they have a real democracy, stop trying to destroy it so the 1% can plunder their oil. us hands off #venezuela! #nicolasmaduro #stoptrumpscoupinvenezuela” and also posted a flier calling for a mobilization in New York City against the coup. He also wrote an impassioned note on Facebook in defense of his position in response to a backlash to his Twitter post.

While the US, its allies and Guaidó continue to look for ways to destabilize Venezuela and generate greater economic crisis, the Venezuelan people remain strong and defiant, and the people across the world are standing with them. It is clear that when the US, European Union and the puppet countries of Latin America call for a democratically elected president to step down, it is not over wanting to better the lives of common people in Venezuela nor genuine concern over supposed fraudulent elections or a supposed humanitarian and migratory crisis. If that were the case, their eyes would be fixed on somewhere like Honduras, a country whose president Juan Orlando Hernández, committed blatant electoral fraud, is involved in massive corruption scandals and whose brother was arrested for drug trafficking in the US in November. His presidency has caused unprecedented levels of poverty, misery, and unemployment, which is clear from the daily exodus of thousands of Honduran citizens who embark on the migrant caravans in an attempt to find better opportunities. Yet, Hernández’ illegitimate reelection was recognized immediately by the same countries that lead the assault against Maduro today and none of them demanded fresh elections in Honduras.

What is happening today in Venezuela is an imperialist offense coordinated and directed from Washington to take back control over a nation with one of the largest petroleum reserves in the world and that has dared to challenge imperial interests in order to favor its people.