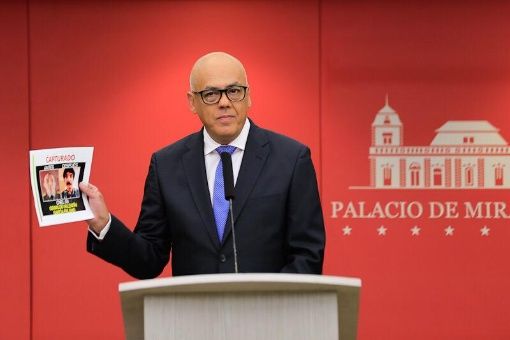 The coup d’état was coordinated by retired Colonel Oswaldo Valentín García Palomo, who was arrested on Jan. 31 in an intelligence operation in Venezuela.

The Venezuelan Minister of Communications, Jorge Rodríguez, held a press conference on Thursday in which he showed evidence of the plan of attempted coup d’état carried out by the rightwing against constitutional President Nicolás Maduro, with the participation of the governments of the United States and Colombia.

The official revealed that thanks to a Venezuelan intelligence operation, retired colonel Oswaldo Valentín García Palomo, who was trying to enter the country to organize a military coup d’état, was arrested.

“The vehicle in which García Palomo travelled to our country (Venezuela) was put in by Venezuelan intelligence,” which was captured on January 31, according to data provided by the Minister of Communication.

He denounced that the U.S. and Colombian governments supported the coup actions, one in May 2018 in the framework of the presidential elections; and another in January 2019, which has already been frustrated.

Rodriguez reported that Garcia Palomo coordinated the action from Cucuta and has numerous entries to Miami, despite the request to capture Interpol made by Venezuelan President Nicolas Maduro.

“Forget all those things about humanitarian operations, everything is a hoax and a lie because the real intention of the administration of Donald Trump, John Bolton, Marco Rubio and Mike Pence, is the military aggression against Venezuela,” he denounced.

In an audiovisual material, which forms part of the Venezuelan authorities’ investigation, García Palomo confessed the military operations he intended to carry out on Venezuela, accepts their connection, and mentions his main collaborators.

In his testimony, submitted to the polygraph test, he acknowledges that he contacted an official of the Central Intelligence Agency (CIA) in Colombia: “In Colombia I met with (the Venezuelan businessman) Parsifal de Sola and a national police officer of that country, who gave me support.

“They do their job of connection, soldiers, friends of them, which allows them to assemble an important group to carry out the military operation (…) the main objectives were the Charlotte, the Presidential Palace and the Communications Network of Caracas (capital),” he said.

The former National Guard colonel detailed how the attack on President Nicolás Maduro would be carried out, which occurred on August 4, 2018.

“The attack perpetrated against President Maduro had its training in Colombia,” he said.

He also told Osmán Alexis Delgado Tabosky that he was one of the financiers of the terrorist teams to carry out the attempted assassination of President Nicolás Maduro.

Minister Rodriguez said that with regard to the most recent operation, the objective of overthrowing President Maduro had to be achieved on January 27, then January 31 and finally February 3, but the actions were frustrated.

In his statements, García Palomo mentioned former Venezuelan opposition congressman Julio Borges as one of the main organizers of the plans against President Nicolás Maduro.

“He (Borges) said he was willing to do anything to get out of the Venezuelan government. I told him to count on me and give me his military contacts, one of them was Fernando Albán,” García Palomo said.

Investigations by Venezuelan authorities determined that while Borges was sitting in dialogues with the Bolivarian Government in the Dominican Republic, he was organizing the failed assassination attempt against President Maduro. Minister Rodriguez said that is one of the reasons he did not sign the political agreement reached and that it would lay the groundwork for the May presidential elections.

As part of the team that participated in the 2018 assassination attempt, García Palomo also mentioned Lieutenant Colonel Ovidio Carrasco Mosqueda, who had access to information about the presidential activities and relations of senior Bolivarian government officials.

Carrasco Mosqueda is also in detention and mentioned Borges as the main leader of the failed assassination attempt, with whom he met several times.

“An attack against the president is coming, Julio Borges tells me,” declared Carrasco Mosqueda.

Others involved: Foreign actors and fugitives from Venezuela

“This military coup carried out by Santos attempted, in violation of the Constitution, to prevent the people from expressing themselves at the ballot box on Sunday, May 20, 2018 (the day on which the presidential elections were held),” Rodríguez denounced.

Retired colonel Oswaldo Valentín García Palomo, who would be the main link for a new coup attempt in Venezuela, revealed links between militants of the extreme right-wing Primero Justicia party, including Julio Borges, in the ongoing coup plan, in addition to the attempted assassination perpetrated in August 2018 against the president of the Bolivarian Republic of Venezuela, Nicolás Maduro.

The information was announced by the Vice President for Communication, Tourism and Culture, Jorge Rodríguez, in statements this Thursday from the Miraflores Palace, Caracas, when he showed a video with part of the confessions of García Palomo, implicated in the terrorist actions.

García Palomo confessed that Julio Borges told him that he was willing to do everything to send away the Venezuelan government. According to the testimony of the retired colonel, for the attempted assassination and for other coups attempts, Borges recruited the former Chief of Communications of the Presidential Honor Guard, Ovidio Carrasco Mosqueda.

In this sense, Rodriguez said that Carrasco offered a brutal testimony and a submission to the polygraph, so he confessed he had a telephone contact with Borges to inform him that the Venezuelan Head of State would attend last Saturday, August 4 – the day of the drone and explosives attack – to Bolivar Avenue in Caracas, to participate in the commemoration of the 81st anniversary of the Bolivarian National Guard (GNB).

Rodríguez explained that Carrasco met for the first time with Borges in the La Llovizna park, located in Bolívar state, and the right-wing militant asked him to be part of the operations to overthrow President Nicolás Maduro.

In exchange, Carrasco asked Borges to guarantee his residence in the United States and places in universities for his daughters.

“The investigations indicate that even Carrasco facilitated the process for the drones to attack the presidential platform on August 4, 2018. This traitor was recruited by Julio Borges to facilitate the assassination of President Nicolás Maduro. That is why I tell you that, sitting at the dialogue table, Borges was already involved in the attempted assassination”, said Jorge Rodriguez, also the People’s Power Minister for Communication and Information.

In this sense, he asserted that it was clearly established that it was Julio Borges the one who directed the whole attempted assassination process.

“A murderer like Borges must give up hypocrisy. Democracy nothing, humanitarian aid nothing, what is he going to say now when his own accomplices gave him away”, said Rodriguez.

The de facto powers of Colombia and the United States supported the terrorist actions of Oswaldo Valentín García Palomo, implicated in coup d’état against the Constitutional Government of the President of the Bolivarian Republic of Venezuela, Nicolás Maduro, affirmed the Vice President for Communication, Tourism and Culture.

Rodriguez explained that García Palomo, who was captured, has given numerous statements and in view of the seriousness of his confessions, due to the security of the State, the Prosecutor’s Office approved to show to the media a part of Palomo’s voluntary confession.

In the video that was shown to the media where García Palomo appears, captured by the country’s security agencies, on January 30, the detainee said that he was in talks with the agent of the Central Intelligence Agency (CIA) of the United States Antonio Rivero, colonel of the National Police of Colombia nicknamed “Alejandro”.

Rodriguez indicated that this subversive group was involved in the coup attempts of 2014 and May of 2018.

“Juan Manuel Santos was involved in the military coup of 2018, which was the coup that attempted to attack the Constitution, preventing the population from voting”, said Jorge Rodríguez.