The 4th edition of the MED Dialogues 2018 was held in Rome on the 22-24 of November, organized by the Italian Institute for International Political Studies (ISPI) and the Italian Ministry of Foreign Affairs at the luxurious hotel Parco dei Principi.  Among other conferences,  we want to highlight two meetings to show the double standard implemented by the “new” Italian institutions towards NATO’s and Russia’s invitees.

NATO Secretary Jens Stoltenberg, is “interviewed” by the new president of Rai (the Italian public TV channel) Marcello Fao, in a congenial manner, completely homologated to the Atlantic world views, along with another speaker, Defense Minister, Elisabetta Trenta.

“Yes one of NATO’s main tasks is to help to fight terrorism and stabilize neighboring countries, therefore NATO and NATO allies have participated and contributed to the fight against Daesh in Syria and Iraq”.

Incredible that he is not afraid of being ridiculed…who really helped Daesh with the several wars waged by NATO members?

“NATO has to be able to conduct big combat operations, as NATO and NATO allies have done in Afghanistan, as we have done in Iraq”, and here he knows that he cannot avoid naming Libya but he minimizes saying, “and Libya and any other places”. He leaves the audience before the others for his plane and Foa salutes him: “it was a pleasure and honor to have you here”.

The session with Stoltenberg did not allow any question from the public, so the only possibility to react to the astonishing statement by Stoltenberg would have been some intelligent remark or question by Mr. Foa, who just kept smiling respectfully. 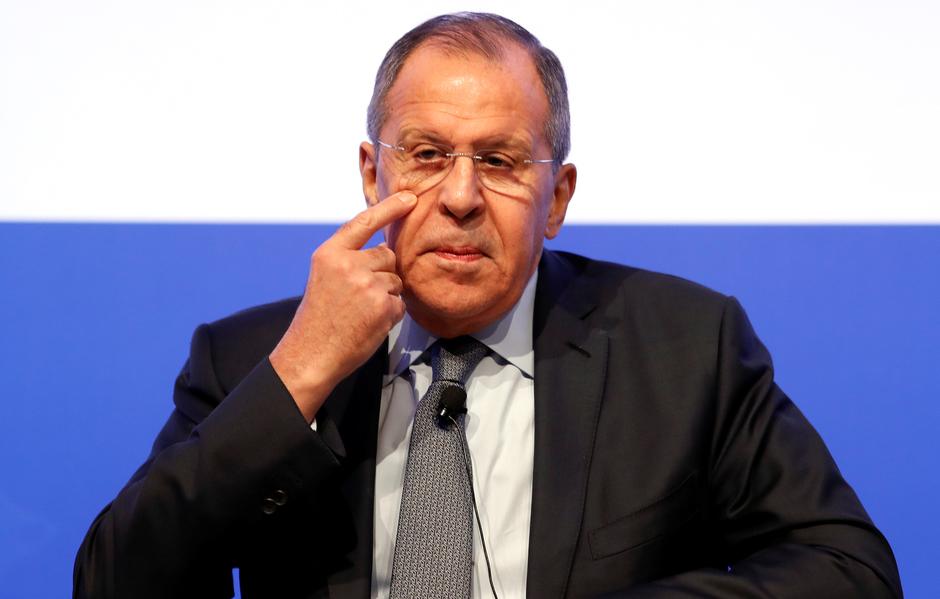 In the same event, a completely different session was held on November 23, a Special Dialogue with Russian Foreign Minister Sergey Lavrov.

In his introductory remark, Lavrov mentioned the role of the West in many interventions which ruined the world. Here are some quotations:

“Countries violated the UN laws bringing chaos in the geopolitical space of the Mediterranean”;

”The lessons from Iraq, Libya and Syria are not taken into account by the arrogant policies in the region; fundamental international agreements are ruined”;

“generally there is a trend to replace the international law with something which Western diplomats call *rules based order”;

“there are attempts to privatize global institutions”;

“the international life cannot be guided by those who live only in the prism of domestic electorate”;

“the former NATO general secretary Rasmussen had said that the unified will NATO is an extremely powerful source of international political legitimacy (…) now Rasmussen is the advisor of Ukrainian president and I don’t think his advise will be helpful to solve the crisis; they want to forget international laws to introduce rules based on the legitimacy of groups like NATO”.

“There are attempts to revise and fragment international law”;

“The reality of the XXI Century demands to come back to the UN Charter and to the restoration of the international role of UN (and UNSC – UN Security Council – for peace and security), instead of actions based on imperialistic philosophy”;

“We have to get rid of initiatives which are routed in the nineteenth century colonial imperialistic philosophy, otherwise it would be impossible to try to resolve the crisis, like in Syria”.

“Libya was ruined by NATO bombings in gross violation of the UNSC resolution 1973, which only spoke about declaring a no-fly zone, meaning that the Libyan air force cannot fly, and they were not flying, but instead of ensuring the no-fly zone, NATO bombed the Libyan troops and helped people with very bad reputation, armed by some Europeans, in violation of the UNSC embargo, and also by some regional powers to help those people topple the Libyan government and then start trouble in Africa; the very same people who toppled Qaddafi with weapons of you know whom, threatened the government of Mali”;

“so for Libya it is clear that Libyans themselves must resolve the crisis and that all of them must be part of the dialogue, it is indispensable and for this reason Russia participated in the conference in Palermo”.

“The Balkan countries were pulled into NATO without asking the local population, to the opposite, with aggressive pressures on them; the public opinion of those countries is really being aggressively pressured; the number of western leaders who campaigned this was amazing”.

“We acted in Syria under the request of the legitimate government”;

“We are talking to everybody in Syria, and in Yemen, except for the terrorists”;

“the Astana process we promoted was the first step to wake up UN process which was dormant and to initiate a dialogue between the government and the very broadly represented opposition; then we convened the Sochi congress on Syrian national dialogue which decided to create a Constitutional Committee”;

“those who insist on setting a deadline by saying this is my list ,I don’t care what you think, they want only one thing: to ruin the Astana process and to come back to some regime change logic”;

“by the way when the Islamic State was closer to Damascus in the summer of 2015, nobody was calling on the opposition to start negotiations; when the situation changed on the ground, everybody is calling the government to start negotiations; Bias in these kind of things demonstrates not only a double standard but it reveals the geopolitical games”.

The session with Foreign Minister Lavrov allowed questions from the public BUT only pre-prepared ones, all very biased. Others who raised their hand were deliberately ignored by the organizers.

“What is the rationale of supporting States in Middle East if they kill and torture? Syria for instance, your policy of supporting the State instead of peoples? And can you ask your friends to be less violent to their populations?”

(Cheers by the public).

“Yes, the States must not be violent against the population, there are many international legal instruments and I hope they will not be replaced by those who want to forget about international laws and introduce their rules based system…it happened in the past with the attempts to impose the *New world order”.

“On authoritarian regimes, I already said that there are obligations on human rights and you cannot use your sovereignty to avoid it. But you have to be realistic: if you are obsessed with human rights and don’t give a damn about the stability of the countries, and to life, which is a human right, not to mention social and economic rights, I am afraid you are one sided. Yes, Iraq, Libya, Iraq more than Libya, were considered authoritarian regimes, but right to life risks and violations, or may be hundreds of thousands less after the “people’s revolutions” happened, in Iraq and Libya where there were foreign interventions, ask the Libyans how they used to live, their educational rights, the economic situation they enjoyed, so you cannot say forget about anything, bring the freedom to people; you cannot say forget human rights and be respectful of any government”.

At minute 35.07, a question by Maya Yahya, director of the Carnegie Middle East Center in Beirut (also chosen by the moderator during another session on Syria):

“Will Russia continue to support Bashar al Assad if his continued presence in power will block reconstruction? Do you see eye to eye on Iran on this issue?”

“We want Syria to be calm and stable. (…) We respect the UNSC resolution and the Geneva communique of June 2012, where it is clearly stated that the process must be Syrian-led and Syrian-held and that only the people of Syria can decide the fate of their country. And the method of such decision to be taken is a Constitution and then elections. Syrian people have to decide whether they want somebody to go or to stay. As regard to the links between Bashar al Assad staying in power and outside assistance… (…) USA justify their presence in Iraq by the need to fight ISIL and at the same time they say it is impossible to defeat ISIL as long as Bashar al Assad is there. A very weird logic, and I hope that everybody is committed to the principle that the Syrian people themselves must decide the fate of their country through elections”.

Lastly are a few words from Italian Prime Minister Giuseppe Conte, who dared to conclude:

“And if NATO now looks at the Mediterranean, it is because, let me say it, of the Italian commitment”.

Better not to commit then!