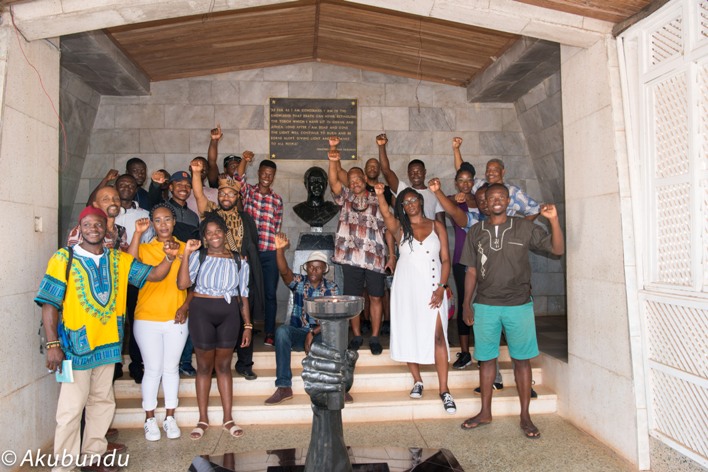 Several 50 Year activities commemorating Kwame Nkrumah writing and publishing of the “Handbook of Revolutionary Warfare” in 1968 were organized by the All African People’s Revolutionary Party (A-APRP) in Ghana in September of 2018. These activities demonstrated a living example of Nkrumah’s call in the Handbook for the creation of the All African Committee for Political Coordination (A-ACPC) and the A-APRP (and also the All African People’s Revolutionary Army – A-APRA). In the Handbook, Nkrumah articulates that Pan-Africanism can only be achieved with the fusion of all revolutionary Pan-Africanist parties/formations into one entity. That entity will be the A-ACPC. Nkrumah goes farther to proclaim that the A-ACPC in its completion will embody the A-APRP that he envisioned as the political instrument that governs one continental socialist government in Africa. The living example of the work taking place to make Nkrumah’s call in the Handbook reality was manifested at the 50 Year commemoration as A-APRP representatives from our Ghana, Tanzania, Kenya, Guinea-Bissau, Azania (South Africa), U.S., and Canada Chapters, along with our Brother/Sister organizations we are working with to build this A-ACPC like the Amilcar Cabral Ideological School from Nigeria, the African Party for the Independence of Guinea-Bissau (PAIGC), the Pan-Africanist Congress of Azania (South Africa), and the Azanian People’s Organization (AZAPO) were all present to advance our work to build the A-ACPC, A-APRP, and A-APRA. There are or will be articles written about the other 50 Year commemoration events like Pan-African Women’s Day, the Handbook of Revolutionary Warfare Seminar, and the discussions held with students at the W.E.B. DuBois Center on other areas of this site. The purpose of this article is to highlight the trip our delegation members took to the Ghanaian towns of Cape Coast, Takaradi, and Nkroful.

Cape Coast is where the notorious Elmina slave dungeons are located. These dungeons are where Africans were brutally and savagely kidnapped from all areas of the African continent and warehoused for shipment to the Western Hemisphere as property. Untold millions of Africans were terrorized in these dungeons. Many of us in the delegation had been to the dungeons previously, but each time brings its own devastating pain and trauma when we are faced with the reality that our people were brutalized in this place that itself represents the only reason those of us born and living in the Western Hemisphere exist here. The experience was equally traumatizing for our comrades born and living in Africa. The fact we were all there together as one African family only reminded us of all the trauma and work we have done and need to continue to do as a collective people to deconstruct 500+ years of misinformation and concerted efforts to divide our people.

It’s quite possible that for some folks, the slave dungeons (Elmina, as well as the Cape Coast Castle which we didn’t visit), may appear to be some sort of museum or tourist spot. For Pan-Africanists, the slave dungeons represent the necessity for us to continue to be resolute in our determination to fight for our people’s liberation and forward progress. Once you go there, the cries of our anguished ancestors will reveal to you that we owe their legacies nothing less.

From Cape Coast we traveled to the town of Takaradi to meet another group of A-APRP organizers. They took the delegation on a tour of a closed tire factory. The factory hasn’t been functional since Nkrumah’s government was overthrown in 1966. From 1960 through 66, the factory produced almost 100,000 tires annually and like all of Ghana, it was operated using the socialist construction model. The collective basis of the factory explains how a poor country like Ghana was able to develop such a productive venture that provided jobs and resources for the entire country. The factory was fully self-sufficient. And, for anyone who is still confused about the mission of imperialism in Africa, it was telling that once Nkrumah’s government was illegally overthrown, the traitors who sabotaged his government immediately sold the factory to Firestone Corporation who promptly disabled and closed the factory so that it would never be able to viably compete with their private industry tire production efforts again. Today, the equipment in the factory is dated and no amount of idealism would make that factory operational now, but Nkrumah gave us the vision and the example of how unity and socialism will benefit us, not just in one country like Ghana, but in all of Africa, united, and operating as one government, one entity, designed to serve the African masses.

Remnants of Former Tyre Factory in Takoradi, Ghana which operated during the Socialist Government of the Convention People’s Party (CPP) led by Kwame Nkrumah

Finally, our delegation visited the small town of Nkroful where Kwame Nkrumah was born in 1909. The house he grew up in is there and a memorial of where he was buried is still there. Nkrumah holds the distinction of being one of probably very few people who have actually been buried in three different places. When he made his initial physical transition, he was buried in Guinea-Conakry where from 1966 to his death in 1972 after reactionaries took over Ghana in February of 1966. When that unfortunate incident took place, the brave and courageous government of Sekou Ture and the governing Democratic Party of Guinea (PDG) provided safety for Nkrumah by welcoming him to Guinea and declaring him the co-president of that country. After he was buried in Guinea for a number of years, as the people of Ghana began to deconstruct the lies they were told about Nkrumah in the 60s to justify his overthrow, the people began to want Nkrumah’s remains in Ghana. As a result, his body was transferred to the memorial site we visited in Nkroful before his remains were eventually removed again to be placed in the huge Nkrumah memorial mausoleum that is now located in central Accra.

Our delegation spent only a few minutes at the Nkroful location engaging in peaceful reflection of Nkrumah’s life and what this man meant to the masses of African people everywhere on Earth. Again, for some people, this experience could represent some sort of academic learning experience. For us, it was simply reaffirmation that it is our responsibility to ensure Nkrumah’s vision for Africa/African people is fulfilled. He was of course not able to live to see his vision manifest itself, so it now all of our responsibilities to carry this work forward.

That evening concluded the trip with a meeting and dinner with a student organization at the University of Takaradi where the discussion of why Africa and African people are poor was posed to the students.  Like all of the 50 Year activities, our intention is to keep the flame of Nkrumah’s ideas burning as we continue to form the building blocks to concretize the strategy he gave us on how to build Pan-Africanism.  As we all stood at his memorial in the small and quiet town of Nkroful, as we watched the small flame burning slightly, but resolutely, at the head of his monument, the irony of that small but steady flame surely didn’t escape any of us.