CLOC  Via Campesina
Translated by Internationalist 360°

On Saturday, August 11, in Urachice, Yaracuy state, there will be a large national peasant assembly with the strategic perspective of moving towards the articulation of a broad platform of struggle in which peasants, small (as) and medium ( as) producers (as), associations and productive guilds, communal councils and communes of the field, peasant movements, professionals and social leaders.

The initiative, convened by the Bolivar Revolutionary Current and Zamora, is within the framework of the deep economic crisis that affects the Venezuelan people, and has as a strategic objective to articulate the struggles of all patriotic sectors with a productive vocation, from the peasants without land or without the adequate legal security of its properties, to producers without inputs, without spare parts, without infrastructure and without personal security in the countryside, going through the communal councils and communes without financing or state support. A unitary space of this type is necessary to be able to fight in depth the agrarian and corrupt mafias (as) in the organisms of the State, be these judges, managers (as) of companies or officials of institutions of the Ministry of Popular Power for Agriculture and Lands. 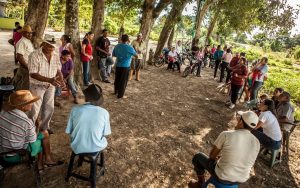 The great assembly on Saturday will be a space for meeting, articulation, debate, reflection and the formulation of proposals to contribute to the transformation of the current agrarian model towards a productive one based on the leading role of those who know how to produce: the peasants, the small and medium producers and all those with a productive patriot vocation. This, from the conviction that the agrarian productive problem must transcend the political diatribe.

Keeping the strategic direction of the revolution and its political vision as a course, we must open ourselves to a very broad, democratic and, therefore, tolerant confluence before the ideological differences to advance towards the strategic purpose of a food-self-sustaining country, a fundamental prerequisite to guarantee independence and national sovereignty.