July is a month of victories for these lands of lakes and volcanoes and as on July 19 the fall of the Somoza dictatorship, 39 years later the people proclaim, along with Daniel Ortega, the failure of the right-wing coup.

On the morning of July 11, the second special meeting was held at the Organization of American States (OAS) to discuss the internal situation in Nicaragua, following the outbreak of controversial protests on April 18, demanding the repeal of the INSS reforms.

The objective of the meeting was to evaluate the work of the technical groups of the Inter-American Commission on Human Rights (CIDH) installed in Managua over a week ago, with the consent of the Nicaraguan government that accompany the work of monitoring, verification and clarification of the acts of violence that have taken place during the past 85 days in the country, a period in which the goal of the right has been shown to dismantle the democratically elected government of Daniel Ortega and appoint a government junta, or announce an electoral advance for March 2019, violating the current constitution and the rule of law.

For the second time, the report presented this morning by the Secretary General of the IACHR, Paulo Abrao, has a marked subjective and biased character, making reference only to the information reported by the Nicaraguan human rights organizations, which have been delegitimized by decades after t of he exposure of their funding sources, the position of their managers and the political character that identifies them, despite naming themselves non-governmental organizations.

For more than half an hour before the Permanent Council of the OAS, Paulo Abrao only recognized as true in Nicaragua a supposed wave of human rights violation provoked by the Sandinista government and executed through paramilitary forces operating in the country under the consent of the national police, according to dubious sources consulted by the IACHR and that the opposition, or rather independent, communications media in Nicaragua want to portray as heroes of the moment. The most curious thing is that Abrao himself in his declarations in Managua has shown the discrepancies between these organisms that have been unable to collect statistics. All have shown a different number of deaths, disproportionate to reality, which makes us think that the higher the number of victims declared, the greater could be the funds obtained as a prize for local projects.

In no way did Abrao mention the hundreds of attempts made by government representatives who attend the national dialogue, and who now integrate the Verification and Security Commission, to stop any violence wherever it comes from, remove barricades that have impeded the right to free movement of Nicaraguans, and even of Central American carriers stranded in Nicaragua totally alien to the conflict, which the right tries to use as a collateral effect of “peaceful protests”.

Abrao also failed to mention the failure suffered by the IACHR itself and the representatives of the Episcopal Conference of Nicaragua, when they tried to mediate with the right in Jinotepe to find a humanitarian solution that would allow the country to leave more than 400 carriers from El Salvador, Costa Rica. Rica, Guatemala, Honduras and Panama, deprived of food, access to medicines, in almost survival conditions, all of which should be included in the sacred concept of Human Rights defended by the IACHR.

Similarly, Abrao silenced the high number of terrorist acts, kidnappings, murders, looting, among other forms of crime committed by opposition groups that lead the alleged “social and peaceful outbreak in Nicaragua,” and that the government has been reporting constantly to the IACHR and the Office of the High Commissioner for Human Rights with extensive documentation and evidence.

For some inexplicable reason for contemporary law, the IACHR insists on noting that none of these actions constitute human rights violations, but that they are common crimes but can not be tried by the competent authorities because supposedly there are no guarantees for due process. The purpose is clear, delegitimize state institutions and support the demand of the right of a profound reform in the country to hide the coup.

In the end, every attempt by the government to restore order in Nicaragua seems to be diluted in the concepts of “excessive use of force” and “paramilitarism,” with the activity of the competent organs being criminalized and the terrorists being victimized. Incredibly, this happens in Nicaragua, a country that has been praised by the OAS, the United States and the UN, to promote as an example in the Central American region the good work of the National Police, which today they want to show as “repressive”.

Paulo Abrao and the IACHR also fail to take into account the statistics offered by the Truth, Justice and Peace Commission, formed in the country a few days after the social outbreak, which has been thoroughly investigating each event. In the last report presented by this commission on the acts of violence and terrorists that took place from April 18 to July 4, it is reported that of the 209 deaths, 108 are linked to the dams that maintained in more than 200 points of Nicaragua the anti-canal peasant movement, led by Francisca Ramìrez and Medardo Mairena, before the police operations to restore order and the right of Nicaraguans to freedom of movement.

When he was forced to comment on this complex problem, Abrao was very brief and at all times used the term “presumed” to describe what attack, humiliation and affront the Sandinista sympathizers have suffered in the last 2 months of the attempted coup.

To mention only some statistics, it is enough to point out that criminal gangs in Jinotepe and Diriamba have murdered 8 Sandinista sympathizers in the last few weeks, kidnapped 20 and plundered 16 public institutions. In most cases, the victims have been subjected to cruel, inhuman and degrading treatment, which they describe as terrorist acts, violence aimed at sowing chaos in the population and altering the constitutional order, far removed from the supposed “peaceful and civic protests” the right tries to sell.

All this has happened with the consent of some bishops of the Episcopal Conference of Nicaragua, in clear violation of their impartial status as mediators and witnesses of the national dialogue. The controversial role of the church during the crisis in Nicaragua has unleashed strong popular rejection, despite the deep religious faith professed by Nicaraguans, where 40% of the population is Catholic and 50% is Protestant. 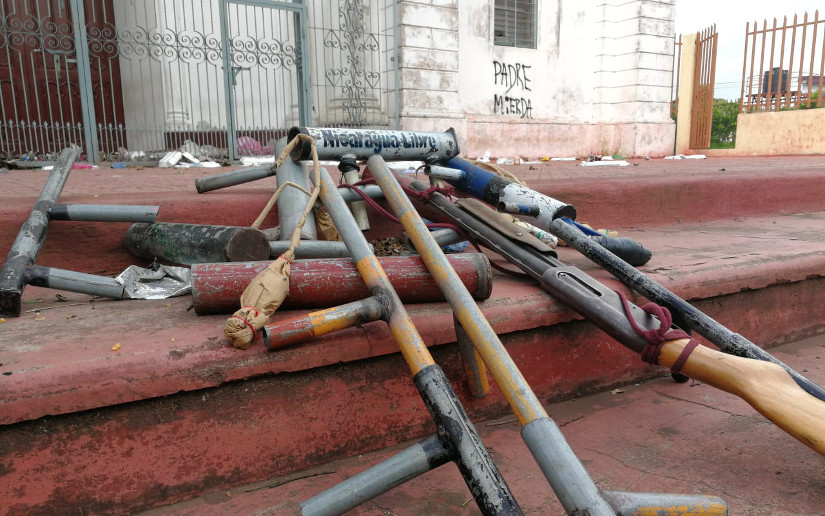 The Secretary General of the IACHR also minimized the attention provided by the government of Nicaragua to the members of the Special Monitoring Mechanism for Nicaragua (MESENI) and the Interdisciplinary Group of Independent Experts (GIEI) in the country. The coordinations promoted for the visit to detention centers in which they have been able to verify the condition in which the detainees are held and verify that they were not subjected to torture, disproving statements made by the media that oppose the government. There were a substantial number of meetings held with public institutions where they could verify, if it was their true intent, the committed work of the government with regards to human rights in the country.

All these omissions of the IACHR, and another long list we could mention, do not surprise us, nor did it surprise the Chancellor of Nicaragua, Denis Moncada Colindres, who presented to the Permanent Council of the OAS the reality facing the country, threatened by “The terrorist attacks of internal and external political groups, which have been joined by transnational organized crime, in order to carry out a coup d’état to change the legitimate government of President Ortega, democratically elected in accordance with the Constitution and the laws of the country in November 2016.”

The truth that the IACHR and the OAS conceals is that the Civic Alliance that attends the dialogue in supposed representation of the right and the “dissatisfied” population, does not really have control of the internal situation in the country, making it difficult to act as interlocutor, to make necessary decisions and restore peace. This path can only be guaranteed by the government. The right are only united by the route of the coup, which translates into a 40-point agenda, submitted by figures of the extreme right who support the Alliance in their work, with the aim of promoting a “democratic and institutional reform” in Nicaragua.

In practice, this Alliance brings together a wide range of sectors, but has not been able to present a coherent agenda, beyond the coup d’état against the Ortega government that they tried to apply over the last few weeks that the population itself has dismantled, after removing the coup backers in the streets.

During the first weeks the right-wing media platform worked to multiply the psychological war, but for the past month this pattern has been falling apart. Many wonder at the reasons for the trip of Victor Cuadras, a member of the Civic Alliance, to El Salvador at the current juncture. This pseudo student leader has declared interest in meeting with the Nicaraguan diaspora, but in reality his purpose is to reactivate the coup machinery from the Trollcenter in El Salvador, to take back more than 150 thousand false profiles that operated in real time against Nicaragua, with a clear message to Comandante Ortega and the FSLN “to leave”.

As Chancellor Moncada affirms, “Nicaragua has already said enough on the suffering imposed by terrorist groups on Nicaraguan families that have been hostages since April 18 to date”, something that the IACHR can not acknowledge because it is part of the soft coup plot against Nicaragua.

July is a month of victories for these lands of lakes and volcanoes and as on July 19 the fall of the Somoza dictatorship, 39 years later the people proclaim, along with Daniel Ortega, the failure of the right-wing coup.