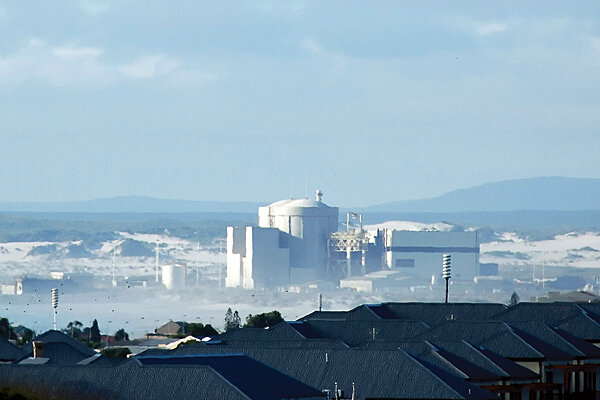 Rosatom—Russia’s state nuclear energy corporation—has recently signed Memorandums of Understanding (MOUs) with a number of African nations to build nuclear power plants within their borders. I spoke to David Himbara, a professor of international development and African energy activist, about the likelihood of Rosatom actually building these nuclear plants.

Ann Garrison:In your Medium essay “Kagame’s Nuclear Power Plant Is a Joke,” you say that the cost of a nuclear power plant would be equivalent to Rwanda’s national budget for three years. Why do you think he’s proposing anything so preposterous?

David Himbara:Rwandan President Paul Kagame is always hunting for the global limelight. He seems to believe that he must validate his supposedly visionary and innovative leadership by pronouncing grand projects that rarely materialize. Of late he has jumped on the bandwagon of African heads of state attempting to fight energy poverty with nuclear-generated electricity.

AG:What other African nations have signed these MOUs with Rosatom?

DH:Other African nations that have signed MOUs with Rosatom include South Africa, Namibia, Nigeria, and Uganda. Kenya too is working with Russia on this.

AG:Why do you think these countries are pursuing nuclear power instead of safer renewable energy?

DH:I think it is a sign of desperation. Currently, Sub-Saharan Africa faces an extraordinary level of energy poverty. Of the region’s 1 billion people, 620 million have no electricity. Worse still, about 80% of the region’s population still cooks with solid biomass. According to the International Energy Agency (IEA), of the 25 countries in the world where more than 90% of the population cooks with solid biomass, 20 are in Sub-Saharan Africa. It is these realities that are forcing African governments to explore all options to confront energy poverty.

AG:It’s hard to imagine this makes sense at all if you consider the environmental consequences. Nuclear waste will pile up, and where are they going to put it? The Sahara? The US is always trying to force a nuclear waste repository on some poor or indigenous community here and when that fails, the waste keeps piling up at the reactor sites, creating greater and greater risk of release because of an earthquake or some other sort of disaster or accident. And that’s aside from the tragic environmental damage caused by uranium mining and the possibility of an African Chernobyl or Fukushima.

DH:Managing nuclear waste and safety is universally complex and dangerous. The Chernobyl disaster reminded the world of the human and environmental costs of nuclear power accidents. South Africa’s Koeberg nuclear power station, the only nuclear power plant in Africa, has been incident-free in its 34-year operations. As for the future, we have to wait and see which other African countries will build nuclear power plants.

AG:And how likely is it that any of these African nations will succeed in building nuclear power plants?

Before Jacob Zuma was removed as South African president, he had already signed a US$76 million deal with the Russians to build a new nuclear power plant. This deal was one of the reasons why Zuma fell. For example, when Zuma signed the deal with the Russians, his minister of finance refused to sign off. Zuma dismissed the minister. From there it was downhill for Zuma, who subsequently lost power.

“Namibia has 6% of the world’s uranium resources.”

Other countries appear to be pressing ahead. Nigeria, Ghana, Senegal, Kenya, Uganda, Tanzania, Zambia, and Namibia appear in the Emerging Nuclear Energy Countries. Meanwhile, Namibia has 6% of the world’s uranium resources, which obviously constitutes an advantage.

AG:What about the cost? Nuclear reactors are not cheap. Can any African governments hope to finance this ambition?

DH:That is a good question. For South Africa, which already has a nuclear plant and 34-years experience running it, plus a relatively large economy of $349 billion GDP, the cost is manageable. Nigeria and Namibia could also afford the cost. What is a mystery is how countries like Rwanda could afford it. A nuclear power plant costs no less than $9 billion, and many cost more. And that does not include maintenance and expertise to run the plant.

AG:Rosatom is reported to hold the largest portfolio of foreign construction contracts in Russia, and I think we can assume that they’re just trying to make money, but what do you think is motivating the African leaders?

DH:As I mentioned already, African countries are facing catastrophic levels of energy poverty. That is the push factor for exploring the possibility of nuclear power.

AG:I know anyone reading this would think I had done a bad job if I didn’t ask whether you think African leaders are motivated to go nuclear because of what NATO did to Libya after Gaddafi gave up his nuclear capability? Nuclear power plants and nuclear weapons are inextricably intertwined.

DH:Historically, nuclear power evolved within political power rivalries initially between Germany and USA during the Second World War. The nuclear rivalry then shifted into the Cold War between the United States and the Soviet Union and their respective regions of influence. Separate from this was the India-Pakistan nuclear rivalry. Other countries acquired nuclear power, including China and North Korea. There were other countries eager to acquire nuclear capabilities—Iraq, Iran, and Libya.

The African scenario I have outlined here is different— the pursuit of nuclear energy is to fight energy poverty.

DH:That is indeed the question. The renewable energy potential in Africa is enormous. Take for example the Grand Inga Dam in the Democratic Republic of Congo. Grand Inga is the world’s largest proposed hydropower scheme. It is the centerpiece of a grand vision to develop a continent-wide power system. Grand Inga is expected to have an electricity-generating capacity of about 40,000 megawatts – nearly twice as much as the 20 largest nuclear power stations.

AG:When I’ve read about big power plant projects in the Global South, it usually seems that they’re being built to power industrial mining and other forms of resource extraction, although the government and the builders say they’re trying to bring electricity to those without. I read about a plan to build a grid that would transport electricity all the way across DR Congo—from Grand Inga Dam on its western border to mineral-rich Katanga Province on its southeastern border—to power industrial mines. Am I overly cynical?

DH:Grand Inga, as I just described, is not limited to the mining industry. The proposed hydropower scheme is the centerpiece of a grand vision to develop a continent-wide power system. This was conceived as a priority project for the New Partnership for Africa’s Development (NEPAD). The Southern Africa Development Community (SADC), which includes DRC, East African Power Pool (EAPP) and ESKOM, Africa’s largest power utility, were part of the Grand Inga vision. Perhaps the most interesting question is why Grand Inga has stalled, but that is a large question in itself, for another day.

David Himbara is a Rwandan Canadian, a professor of international development at Canada’s Centennial College, and the author of “Kagame’s Economic Mirage” and “Kagame’s Killing Fields.”In March 2017, he was awarded the Victoire Ingabire Umuhoza Democracy and Peace Prize. He can be reached at david.himbara@icloud.com.
Ann Garrison is an independent journalist based in the San Francisco Bay Area. In 2014, she received the Victoire Ingabire Umuhoza Democracy and Peace Prizefor her reporting on conflict in the African Great Lakes region. She can be reached at ann@anngarrison.com.