Anti-privatization organizers demand the government recognize that water is a right, not a commodity.

Barely six weeks have passed since the newly elected, right wing-dominated legislature took office in El Salvador, but recent frictions between security personnel of the legislature and university students protesting the potential privatization of water already paint a grim picture of things to come for social movements.

During the month of May, parliamentarians moved to ratify the mining prohibition approved in March 2016 and to shelve all pending requests related to the mining file. At the same time, the Environment and Climate Change Commission, ECCC, moved to reopen a long overdue discussion on water legislation, hinting at the possibility of privatization.

Since 2006, environmental organizations in El Salvador have pressured lawmakers to approve laws that recognize water as a human right and as a common good that should be publicly managed, with a focus on sustainability, accessible domestic use, and regulation of commercial and industrial use.

The debate has not always been civil. In 2007, 17 leaders of the Association for the Development of El Salvador (CRIPDES), were arrested and charged under terrorism laws by the government of Elias Antonio Saca for derailing the launch of a national policy to decentralize water services.

This policy was an escalation of an aggressive neoliberal economic strategy based on the privatization of the public services and natural commons implemented by four consecutive governments of the pro-business ARENA party.  For 20 years, Salvadorans had already endured the dollarization of local currency and the signing of free trade agreements designed to facilitate the privatization of national assets such as telecommunications, banking, pensions and sugar mills, among others.

Important advances were made in 2012 when the legislature approved a bill to reform to Article 69 of the constitution to recognize food and water as basic human rights, pending a ratification vote by a two-thirds majority of the subsequent legislature. By the end of 2013, members of the ECCC had already negotiated 96 articles covering different aspects of a General Water Law modeled after the proposals presented by environmental organizations.

But a stalemate was reached over negotiating mechanisms for water management. 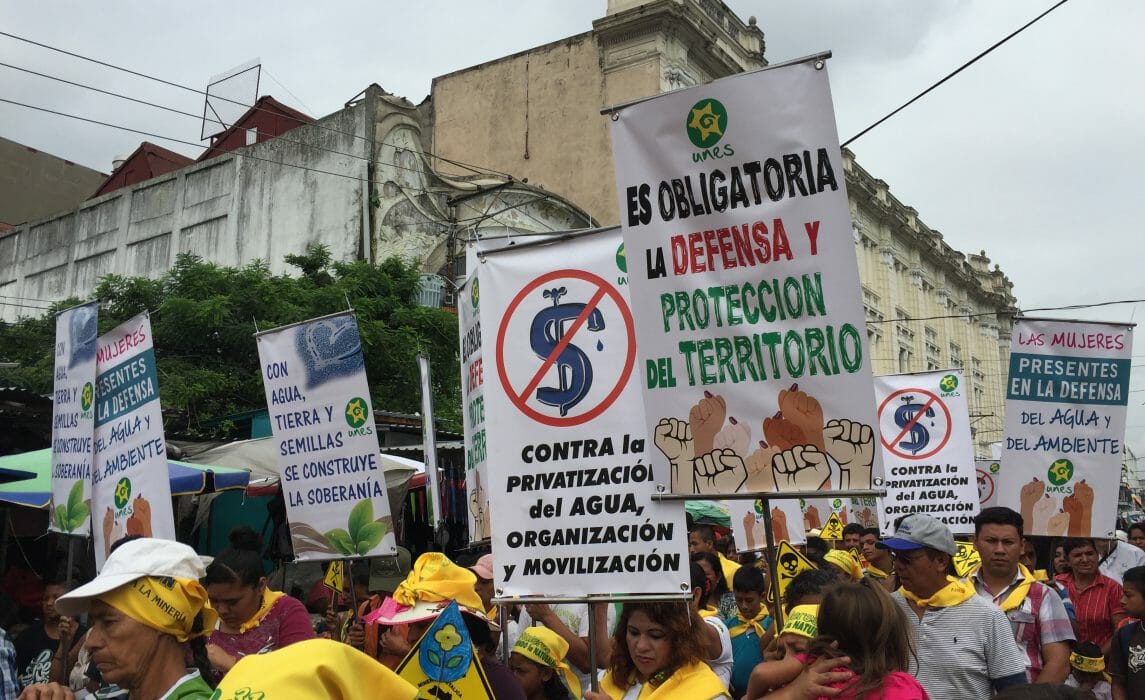 The laws presented by the social movement proposed an autonomous and inclusive management structure that would be publicly appointed and formed of representatives from diverse sectors, including professional organizations, regional water committees, academics and government.

Right-wing parties argued that the private sector should be represented in the water management structure. They implemented a series of delaying tactics to stall the debate for more than three years, until a new law proposal was introduced by a block of unified right-wing parties in June 2017.

The new proposal was also supported by private sector organizations such as the National Private Business Association (ANEP) and the Salvadoran Association of Industrialists (ASI). It was also supported by the U.S. Embassy in El Salvador, which for years has pushed for the inclusion of water management in the public-private partnership laws implemented as a prerequisite for to receive an aid package from the Millennium Challenge Corporation, a U.S. agency that promotes free-market policies.

By reserving two spots for the private sector, the right-wing legislators were effectively inviting private interests to manage what most Salvadorans believe should be a public good. Should legislators go forward with privatization, the price of water would be subject to the ebbs and flows of the market and the whims of corporate managers. The toll that privatizing water would take would be borne disproportionately by the poor, who may be unable to afford water for themselves and their families. Meanwhile, corporations could turn a profit over a resource whose cost could mean life or death for Salvadorans.

Social movement organizations responded with a flurry of statements and press conferences denouncing the proposed managing structure, which they said would provide the business sector with control of the water governing body and eventually lead to further privatization of natural resources.

Protests at the time were muzzled by the legislative electoral campaign already in full swing.

The results of the March 4th legislative elections strengthened the balance of power in favor of ARENA and the pro-business right-wing block of the legislature. With a total of 61 out of 84 seats, the right has more than 50 percent of the votes needed to pass simple legislation without debate, and more than the two-thirds majority required to approve the national budget, make constitutional amendments, appoint heads of key government institutions and members of the judiciary, rule out presidential vetoes, and even impeach the president.

Just two weeks after elections and a month before the new legislature took over, the American Chamber of Commerce, flanked by large multinational corporations, called a press conference to announce private initiatives for water conservation in the context of public-private partnerships and to ask for continued discussion on water legislation.

On the legislative end, the right wing political parties refused to discuss the ratification of the constitutional reform to recognize the right to food and water before the end of the 2015-2018 legislature, thus killing any possibility of constitutional recognition.

During its first sitting in May 2018, the ECCC moved to shelve all requests related to mining and ruled to reaffirm the mining prohibition. The move took many by surprise, but environmental organizations suspected this was not a simple gesture of good will but the beginning of a callous plan to further the neoliberal economic agenda.

Emboldened by the new balance of power, the ECCC moved to deny all public requests to submit information and discuss the water laws, including a joint request by the Catholic Church and Central American University that had submitted its own proposal for a water-managing institution. Furthermore, all 92 articles negotiated by previous legislatures were dismissed. When talks reinitiated, the private sector proposal was taken as a new basis for discussion: eight articles were initially approved, including Article 14, which provides implicit control of water resources to the private sector.

This new way of conducting legislative business, the loss of previously-made gains recognizing the right to water, and the imminent cession of control of water resources to the private sector have opened a new chapter of a battle that has been latent since 2005.

But the swift and unified rejection from the executive government, the Catholic Church, and the civil society organizations taking their battle to the streets suggests that privatization won’t be an easy task for ARENA.

The month of June has seen levels of public mobilization not seen in decades.

On June 7th, a march organized by environmental organizations to commemorate World Environment Day drew over 4000 people to the legislative assembly to demand that the environment commission allow public participation in the water discussions. The same day, about a thousand union members of the national water distribution system also marched to the assembly. A week later, on June 14th, about 4000 students and faculty of the National University marched to the legislature and also demanded to be part of the discussions. The rally turned violent when the legislature’s security forces pepper sprayed students trying to gain access to the building. And last Saturday, over 10,000 people marched through main streets of San Salvador in a self-organized march. Decentralized direct actions continue to occur across the country.

All of these actions have been coordinated through a newly-emerging coalition called the National Alliance against Water Privatization, composed of more than 70 social movement groups. The coalition brings together a range of environmental, students, unions, faith, farmers and women’s organizations who have vowed to continue fighting until the threat of privatization has ended.

Right wing politicians have responded to this public outcry with a high-profile public relations campaign promising not to privatize water resources. But in a new political climate where a strong and unified social movement has found common cause to defend the limited water resources of a country undergoing an ecological crisis, politicians will need more than simple promises to appease activists. They will need legislation that clearly protects water from private interests.