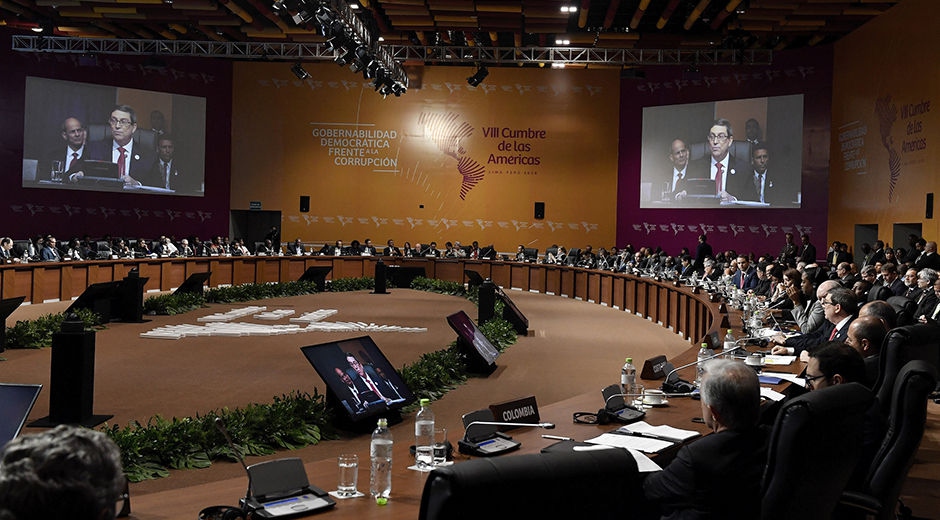 The United States Vice President seems to be ill-informed, ignoring reality and concealing the truth.

I want to ask Mr. Pence directly whether or not the Monroe Doctrine guides his government in its policy towards Latin America.

I want to reply to him with Bolivar’s words:

“The United States seems destined by Providence to plague America with miseries in the name of liberty.”

I want to quote Marti:

“All I have done till now and will do is so as to stop the United States expanding through the Antilles and falling with all its force on the lands of Americ.a”

It is not at all democratic to attack Venezuela and mention President Nicolas Maduro when he has been excluded and is not here to answer you.

I reject the insulting references to Cuba and Venezuela and the humiliating stance towards Latin America and the Caribbean you have taken.

The moral vacuum of the United States government cannot be, nor is it, a point of reference for Latin America and the Caribbean.

The US bears responsibility for the the most brutal abuses against human rights and human dignity of the last hundred years. All the despotic governments in the region, all of them without exception, have been imposed or have received the support of the government of the United States, including the most cruel military dictatorships. Shameful events like Operation Condor or the savage coup d’etat in Chile lie on the conscience of US governments.

Mr Pence’s country was the first and only one to use nuclear weapons against innocent civilians. It is responsible for criminal wars with many hundreds of thousands dead, massacres of civilians, including children,women and old people, whom they refer to as collateral damage.

The US is responsible for torture, disappearances, extrajudicial executions and kidnappings.

The government of the United States is the author of massive, flagrant, systematic human rights violations against its own African-American citizens, of hispanic people, of migrants and of minorities.

It is shameful for humanity that in this extremely wealthy country exist tens and tens of millions of impoverished people.

You have a discriminatory racial pattern in your prisons and in the application of the death penalty; the US is where most judicial errors associated with executions take place; it is where students die from gun fire, their lives sacrificed to the imperatives of political lobbying, especially in Florida.

The government of the United States has received tens and tens of millions of dollars from the armaments lobby and one Miami Senator has received no less than US$3 million for the same purpose.

Miami is where the political mafias are, where self-confessed international terrorists find refuge, and it is also the site of the notorious year 2000 electoral fraud.

You omit, Mr Pence, when you talk about corruption, that your country is the center of financial and drugs related asset laundering and of illicit arms traded towards the South that destabilizes entire countries.

The electoral system that elected you and the legislative system in which you have served for a very long time are corrupt by nature, because they are sustained in an unjustifiably legal way by corporate financial contributions and the so called Political Action Committees.

It is the US government that imposes fierce protectionism without taking into account that this will ruin industry, agriculture and employment across our whole region.

The US is where political lobbies have imposed the idea that Climate Change is an anti-US invention.

The US is where the political and electoral system has seen the scandalous trafficking of the private data of tens of millions of its citizens.

If your government were interested in the well being, the human rights and the free self-determination of people in Cuba, you would lift the blockade, collaborate with our international cooperation instead of sabotaging it and you would fund Cuba’s medical cooperation and literacy programs around the world.

Cuba has been referred to in an insulting way. I answer with the text of the Proclamation of Latin America and the Caribbean as a Zone of Peace, signed in Havana in 2014 by the Heads of State of Latin America and the Caribbean whose principles include the inalienable right of Peoples and States to freely choose their own political, economic, social and cultural system.

I answer you as well with a paragraph from the historic document signed in an epochal event in the international Jose Marti airport in Havana, by his Holiness Pope Francis and his Holiness Patriarch Kirill, who chose Cuba to sign a document which states:

“Our fraternal meeting has taken place in Cuba , at the crossroads between North and South, East and West. From this island , symbol of the hopes of the “New World” and of dramatic events in the history of the 20th Century…”

We are just a few hours away from the 57th anniversary of the bombardment by US airplanes of airports in Cuba, where Cubans died defending our independence and sovereignty, in the bereaved farewell to whom was proclaimed the Socialist character of the Cuban Revolution and it is surprising that Vice President Pence should have come here using the same language as the US government back then when it carried out that terrible event.

Events of the last few years show that coexistence between the United States and Cuba is possible and productive and can be civilized.

For that to happen neither he nor the delegation sitting in the place he has just abandoned should wait hoping that Cuba will concede a single millimeter of its principles, nor cease in its efforts to build socialism.