The article argues that Nicaragua’s government has been negligent in protecting the Indio Maíz Biological Reserve, has not sought international help, and has deliberately facilitated invasion of the reserve by impoverished rural workers families seeking land. Forget about due diligence when reading the Guardian’s foreign news. As usual, in this case too, the reality completely contradicts the report’s main assertions. The Guardian refers to a statement by the Costa Rican government stating that a unit of Costa Rican fire fighters was turned away. But the Guardian report offers neither a link to the alleged statement nor any quote from it.

Here’s the Costa Rican fire service spokesperson on the matter: “We are fully ready to cooperate in any other incident. Fom what we can see, this incident has already been controlled by the army. We were at the border and had to return. We see no problem. In the moment (we offered to help) Nicaragua they didn’t have the personnel to fight the fire, thankfully over the last few hours, it now has the personnel to deal with this emergency and are engaged in controlling and extinguishing the fire”.

In fact, the decision not to use the help offered by Costa Rica was taken jointly by the chiefs of the Nicaraguan and Costa Rican fire services during a meeting in Managua on Sunday April 8th, when they agreed that “the realistic possibilities of controlling the fire by the firefighting services of Nicaragua and Costa Rica were limited due to the characteristics of the fire and that the effective means to control and extinguish the fire is from the air.” In any case, access to the area of the fire was impractical overland, with access being possible almost exclusively by air or sea along the region’s Caribbean coast.

Nicaragua’s Vice President Rosario Murillo noted on April 9th, in relation to coordination with the Director de Operations of the Costa Rican Fire Fighting Service “We have been in meetings with him all weekend, looking precisely at what is being done, the difficulty of reaching the place.” She went on in that declaration to say “There, where the fire has broken out, it’s impossible to reach with trucks or pick ups. What’s really needed, urgently are airplanes equipped with all the technical means to fight forest fires”

Rosario Murillo also explained on April 10th that the Sandinista government led by President Daniel Ortega had “coordinated with Honduras, El Salvador, Panama, Mexico, the Russian Federation, the air forces of each one of these countries, requesting Air Resources to fight the fires”. Currently, helicopters from Mexico, Honduras and El Salvador are helping control and extinguish the fire, contradicting the impression given by the Guardian’s report that the government had not sought international help.

The Nicaraguan government has also coordinated support from the United States authorities with a specialist team sent from the Office of Disaster Assistance of USAID and the US Forestry Service. The team leader arrived in Nicaragua on April 10th. The Guardian’s April 11th report includes none of this information which totally contradicts the impression that report gives by citing environmentalists calling on the government to seek international support, as if it had not already done so since the week before the Guardian’s report was published.

The report quotes criticism from the well known Nicaraguan environmentalist Jaime Incer Barquero. Now in his 80s, Incer Barquero has made distinguished contributions to environmental conservation in Nicaragua. However, his pronouncements on the fire in the Indio Maiz Biological Reserve demonstrate obvious ignorance of the measures taken by the Nicaraguan government to control the fire. The Guardian report also quotes a representative of the Fundación Río NGO, who “noted ‘relations between the countries have not been the best’ due to a long-running border dispute.” But as Costa Rica’s cooperation with Nicaragua makes clear, diplomatic relations take a back seat in the context of a major regional ecological threat like the Indio Maiz forest fire.

The Fundación Río NGO has solicited funds supposedly to support community authorities and fire fighters in the Indio Maiz area, a function well beyond the organization’s statutory objectives. It has now been warned by the Nicaraguan government not to solicit funds for purposes it was not estabished to carry out, functions which are the government’s responsibility and which the government is fulfilling. The self-serving propaganda of this kind of environmentalist NGO is n doubt the fact-free basis for the Guardian’s allegation that “the fires are believed to have been started by illegal homesteaders, who were attempting to clear land for planting crops.”

In fact, the fires began in a marshland area completely unsuitable for agricultural activity, either arable farming or pasture for cattle. One of Nicaragua’s leading environmental scientists, Efrain Acuña, has dismissed the accusation that the area was set on fire so as to facilitate arable or cattle farming, saying “the soils in this zone do not lend themselves to those activities, among other reasons because the acidity is high, the fertility percentages for grazing are very low and so the nutritional value for cattle is insufficient.”

The Guardian quotes Gabriel Jaime of Fundación Río as saying that the government has encouraged rural workers and their families to encroach on land belonging mainly to the indigenous Rama people. But the Guardian report gives no context to that allegation. Jaime’s solution is “removing people and telling them ‘you can’t live in a protected area’ ”. Jaime also criticizes the government’s provision of health and education services in the area as if these did not benefit the local indigenous population. This is another example of a neocolonial NGO patronizing local indigenous people, who own their land and have a strong say in how it is used.

The same false neocolonial argument has been used to misrepresent the potential displacement of indigenous people should Nicaragua’s interoceanic canal go ahead. The canal company HKND and the Nicaraguan authorities consulted with local indigenous people who agreed terms for canal’s construction across their land. But that fact has been systematically omitted or misrepresented by environmentalists in the same way as the complex issue of migration by rural workers families to areas of the Caribbean coast has been.

Western NGOs and the local organizations they fund around the world obviously undermine the role and functions of sovereign national governments. That is why Western corporations finance them. It is also why the foreign news coverage of Western corporate media systematically distort and misrepresent the reality of events around the world. The Guardian report on the Indio Maiz forest fire categorically demonstrates that fact one more time. 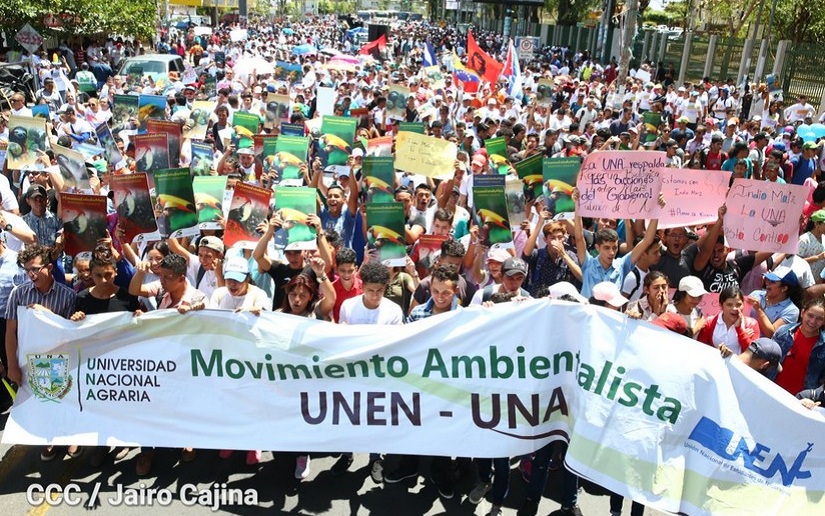 Thousands of young people joined the environmental walk promoted by the Sandinista Youth and the Guardabarranco Environmental Movement as a sign of support for the actions carried out by the Sandinista Government in the Maiz Indio Reserve, once again demonstrating its commitment to Mother Earth. | el19digital