In 2011 Libya, the most prosperous democracy in Africa, was targeted for destruction. Terrorist death squads were unleashed upon the nation. A NATO bombing campaign destroyed the country and plunged it into chaos. NATO’s death squads seized control of most of the oil-rich territory, although 5 years later, the Libyan people continue to resist. After the 2011 NATO assault, accurate information about what has been going on in the country is very rare. Thus I decided to turn for help to Alexandra Valiente, one of the few in the west who continues to follow events closely. She is the editor of the Jamahiriya News Agency and Viva Libya websites which cover events in Libya. She is also the editor of Libya 360 (devoted to news and resistance movements in Africa and Latin America) Syria 360 and Revolutionary Strategic Studies. You can follow her on twitter @libya360 and @jamahiriyanews. She generously agreed to do an interview with me on the current situation in Libya and so below I present the first part of our conversation.

AV
During the NATO war, the Libyan people valiantly withstood empire’s barbaric, criminal “Operation Unified Protector” for close to 9 months. The heroic men, women and youth that fought in defense of their nation were the Green Resistance. 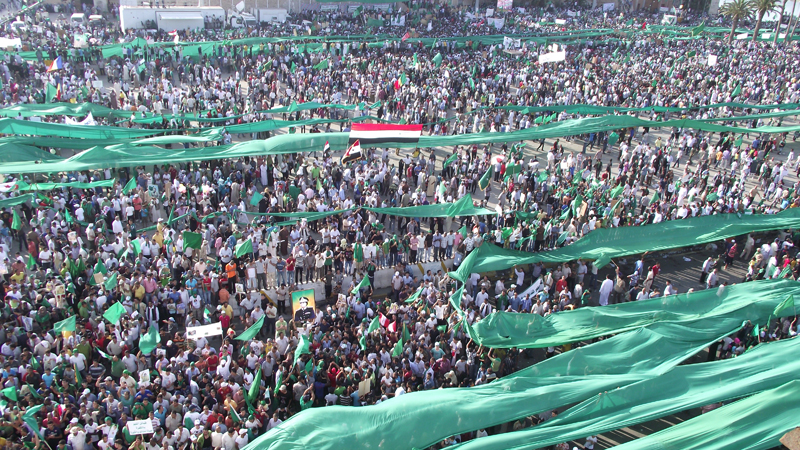 The Libyan Resistance During the 2011 NATO War

Since 2011, the Resistance has been organizing, dissolving and reconstituting itself as it evolves into a very powerful bloc of sister organizations which operate both from countries where exiles found asylum after the war as well as from bases within Libya.

Although there may be differences of opinion regarding the best way to resolve the current crisis, all are unified in their commitment to liberate the country from foreign occupation and terrorism, restore the rule of law via the peoples’ army, the peoples’ police force and an uncorrupted judiciary.

It has been estimated that the cost of rebuilding what NATO destroyed will exceed $500 billion USD.

Not least of priorities is healing the wounds of war, addressing societal divisions in order to reach equitable, mutually beneficial solutions for all parties.

The country must not be divided – its integrity must be maintained.

-have a broad base of support both within and outside Libya.

-is representative of all of Libyan civil society as well as military and intelligence, lawyers and judicial officials, academics and scholars, tribal leaders – professionals in literally all fields of endeavor.

-have a broad support base among other revolutionary organizations and nations.

Reading the Libyan Popular National Movement’s statement on organizational structure, you can see the framework of a government is in place.

The same structure is present in the Libyan National Assembly.

The self-governing element is apparent in all branches of the Resistance, which has its foundation within the ideology of the Great Socialist Peoples’ Libyan Arab Jamahiriya that emerged from the Al Fateh Revolution, and further back into the historical heart of the ancient tribes (approximately 140 in the Libyan family).

The Resistance are a force that cannot be disregarded. However the UN and media have attempted to minimize their significance, portraying them as “a disorganized group of Qaddafi loyalists”, this is far from fact.

Nothing in Libya can change, move forward, progress or heal, without the direct participation of the Tribes and the Resistance. As every Libyan is a member of a tribe, the Resistance cannot be viewed as a separate entity from the Tribes.

Today (April 22) the Libyan Popular National Movement issued a statement reaffirming their rejection of foreign interference. The LPNM have always rejected dialog with the UNSMIL. What is important to understand in this latest statement is that they also reject intra-Libyan dialog that is not preceded by the release of all political prisoners.

Without activation of the Amnesty Law, there is no foundation upon which to heal divisions or rebuild the nation.

AV
His death galvanized the Resistance, inspiring deep commitment to the struggle.

HT
Despite the terrible danger, Libyans have been forming human rights groups to demand an end to rule by death squads. What can you tell us about this?

AV
Human Rights organizations have always existed in Libya. Since the 2011 war they have been forced to work from headquarters based in neighboring countries. Those who attempted to work in Libya have been abducted, detained, tortured. Many have been murdered. Their role in exposing details of widespread human rights abuses occurring across the entire country has been invaluable.

They openly criticized UN efforts to create a government of accord as it became clear in the process of drafting the  Skhirat Agreement that the unity government would not end human rights abuses, but instead grant full immunity to violators.

Since the December, 2015 abduction and detention of NCHRL members by Tripoli militias, the flow of verified news has diminished. Neither do we know the fate of this organization’s members. Their silencing has been a terrible loss.

HT
How would you describe the two governments?

AV
Since the situation is shifting rapidly with the recent arrival of the UN-appointed government of accord (unity government) the best approach to this question is a simple summary of events.

It is important to emphasize that since the 2014 election, neither the GNC nor the HoR contributed to rebuilding the country or providing for the Libyan people. Both have shirked responsibility for the plague of terrorism, human rights abuses, militia violence, impunity and disregard for the rule of law. Both have sanctioned human rights violations, torture, mock trials and executions carried out for purposes of political revenge. Neither has there been any progress on the creation of a constitution. Both have served Western interests.

The GNC, an Islamist group, came to power in 2012, replacing the NTC. Its main task was to create a constitution – a task at which it proved to be an abysmal failure. Being fragmented and conflict-ridden from its inception, the GNC were forced to call an election for June 25, 2014. Less than 14 % of the population in Libya and 1% of Libyans living abroad, actually voted.

The House of Representatives was then slated to replace the GNC August 4, 2014 and continue the task of creating a constitution. At this point, the GNC, backed by Islamist militias, reclaimed power, establishing their base in Tripoli.

Through violence (assaults, abductions, assassinations) the HoR were forced to abandon Tripoli and establish its home in Tobruk.

Neither the GNC or the HoR recognized the legitimacy of the other. But the “international community”, comprised predominantly of NATO member nations and the UN, declared the HoR the sole legitimate government.

Their status as Libya’s “internationally recognized” government continued until the UN-created and supported Government of Accord (GoA) arrived in Tripoli (with the help of the Italian navy) at the end of March. Not being acknowledged by either the GNC or the HoR, they were forced to work from a secured location inside a Tripoli naval base.

Following Martin Kobler’s meeting with Abdelhakim Belhaj and other Islamist militia leaders in Istanbul, the GNC relinquished power and endorsed the unity government.

Kobler met secretly with officials from Tobruk’s HoR on April 19, and the next day they gave their vote of confidence to the GoA.

Based on Kobler’s assertion that the HoR’s approval was the pivotal requirement for the full activation of the GoA, the Libyan people’s response to this move will be crucial.

Kobler admitted on April 12 that the government of accord existed only on paper. This is still true and in the absence of elections, that paper is worthless. The UN cannot create, impose, then legitimize a government. It does not have the legal authority to do so. Only the Libyan people, by a fair and free election, where every citizen is allowed to participate, and any person, regardless of tribe or political affiliation, can run for office, can decide who governs.

HT
Once again outside powers are installing a handpicked government. Do you think Libyans believe it has much legitimacy?

AV
No. They see it for what it is; a foreign body created to recolonize the country, destroy Libyan sovereignty and establish a base of operation for the Muslim Brotherhood.